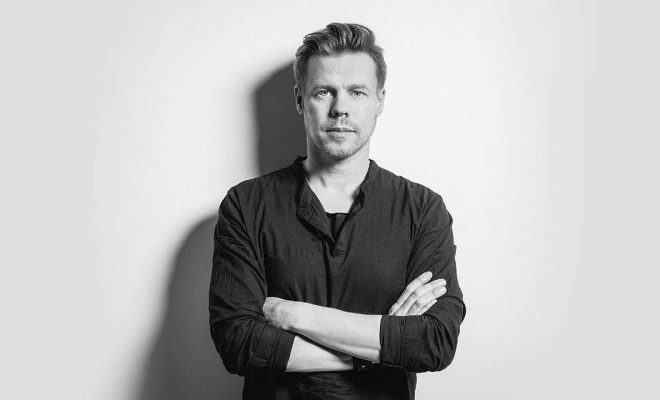 Hailing from Rotterdam, the Netherlands, Ferry Corsten’s lustrous career is exemplified by a passion for music that began as a hobby and spiralled into a full-blown profession. Today, as it was in the beginning, Corsten’s skills lie in his ability to coax the maximum emotional impact from electronic dance music of all genres, not just trance, but also progressive-house and electro. He remains and has always been ahead-of-his time, making music that becomes a template for others to follow.

It was the album, Out Of The Blue, that started it all. As Corsten’s sophomoric artist album under the alias, System F, the eponymous single became a worldwide hit and charted in the UK’s Top 20 UK singles charts and Japan’s Top 10 singles charts for three consecutive years after its release. Corsten’s rapid success ignited a steady flow of releases including ‘Gouryella’ with Tiësto. It was during this time that Corsten’s remix of William Orbit’s ‘Barber’s Adagio For Strings’ became a clubland anthem. Though the instantly recognizable original appeared in the film, Platoon (directed by Oliver Stone), it was Corsten’s heady remix that took the original composition’s strongest elements and amplified them into a singular, explosive masterpiece.

Offers for remix work have poured in furiously ever since, with the latest being a remix of Listenbee’s ‘Save Me’. Corsten has also consistently appeared near the top of international DJ polls and has won his share of industry awards. Over the years, Ferry Corsten has released a steady flow of new music. He has seven full-length studio albums under his belt, namely: Looking Forward as Ferr; Out Of The Blue and Together as System F; and Right Of Way, L.E.F., Twice In A Blue Moon and WKND as Ferry Corsten. These seven killer albums have yielded more than their share of Gold records, including ‘Punk,’ ‘Out Of The Blue,’ ‘Rock Your Body Rock,’ and other world-class hits including ‘Made Of Love’ featuring Betsie Larkin and ‘Radio Crash.’ More recently, the release of his three acclaimed ‘Hello World’ EPs solidified him as an ever relevant presence in trance music, demonstrating his constantly changing and mutating sound and his consistent ability to stay ahead of the curve. ‘Hearts Beating Faster’ ft. Ethan Thompson became one of most revered tracks from the EP, charting high in radio playlists worldwide, finding extended support across the scene’s biggest named spinners and to date receiving in excess of 2 million streams on Spotify. Early 2016 also saw Ferry nominated for two International Dance Music Awards – ‘Best Trance DJ’ and ‘Best trace track’ for ‘Anahera’ – once again proving the longevity of his talents.

In 2006 when Corsten released ‘Fire’ with Duran Duran front man Simon LeBon, that record also became a solid radio hit. The following year, Corsten’s smash single, ‘Beautiful,’ was released to widespread acclaim, and even today that soaring song is demanded by Corsten’s audiences around the globe whenever he DJs. Early 2012 he released his latest artist album WKND, which includes a collaboration with Armin van Buuren called ‘Brute.’ That track is a current favourite with electronic dance music (EDM) lovers across the globe and has since led to various work including projects with EDM stalwarts Bassjackers and current world-beaters Dimitri Vegas & Like Mike. In 2005, Corsten launched his Flashover Recordings imprint and he spends an enormous amount of time scouring the world for fresh talent and releasing music by cutting-edge producers, giving them a voice on the world stage.

Corsten has also released numerous compilations, including releases for the Trance Nation series for Ministry Of Sound, one of the more successful compilation series to date and having sold more than 1 million copies worldwide. Corsten’s own Once Upon A Night series has itself been a platform for new talent and late-breaking tunes, with volume three released in late-2012.

From the outset, Corsten has been a prolific music-maker. So much so that in the early years his musical output was so plentiful and diverse that he felt the need to release music under different aliases. Those pseudonyms included System F., Gouryella (with Tiësto), Moonman and others. 2015 saw the resurrection of the legendary Gouryella, with the comeback single ‘Anahera’ going on to be one of the standout tracks of 2015 and topping Beatport’s trance chart at the year’s end. Such was the positive furore around the return that Ferry decided to breathe life back into Gouryella and bring the much-loved project from the studio to the stage. In 2016 ‘Ferry Corsten presents Gouryella’ became a reality, with a stunning full stage production, the live show hit the biggest arenas and festivals the scene had to offer. Launching the live show at the Allphones Arena in Sydney Australia on March 11th 2016, to a rapturous fan response, this eagerly awaited tour took in exclusive appearances at events such as Balaton Sound Festival, Beyond Wonderland, EDC UK, EDC NYC, Ultra Europe and Belgium’s iconic Tomorrowland festival. The live show was bookended by the release of a 12 track limited edition Gouryella Box set for the music collector and a documentary on the big screen. Fitting given its world premiere in Melbourne where the Gouryella live show began, ‘Gouryella – From The Heavens’ was unveiled as the official movie that details the full story of one of dance music’s most revered and mystical dance acts.

Having always created music with a timeless appeal, Corsten was asked by U2 to do a remix for their ‘New Year’s Day’ in 1999, but it wasn’t until 2008 when U2 released their re-mastered War album that the band decided to include Corsten’s edit. Corsten has produced and remixed for Justin Bieber, Moby, Faithless, The Killers, William Orbit, Duran Duran, Public Enemy, Nelly Furtado, Alexis Jordan, Betsie Larkin and many others including TV’s winner of the ‘X-Factor,’ Melanie Amaro. It’s no wonder that established superstars and pop culture celebrities alike seek Ferry Corsten for remixes, for it’s his winning command of music that is his magnetic draw. Original releases such as ‘Pogo’ and ‘Hyper Love’ Feat. Nat Dunn (which went Top 10 in the US) continue to entice fans, and after all these years his productions still sound as fresh as ever, regularly entering Beatport’s Trance chart.

In 2001 when Corsten released ‘Punk,’ that record annihilated dancefloors from Dallas to Dubai and from Morocco to Miami. Corsten discovered Russian producer Arty several years later, and it’s the Arty Rock N Rolla Mix of ‘Punk’ that was one of the biggest records of 2011 and 2012, played by every DJ across a wide spectrum of styles. As a natural performer, the live show is tantamount to Corsten’s appeal as a DJ. Ever the shepherd of the clubbing masses, working up a sweat while championing people’s inalienable right to dance, Corsten’s live DJ performances have evolved with technology and cultural shifts.

In 2007, Corsten launched his FULL ON live show concept whereby he melds different styles of dance music by playing back-to-back sets with his cherry-picked roster of DJ/producer friends and a state-of-the-art stage setup. Fellow DJs and producers such as Alesso, Dash Berlin, Aly & Fila, Mark Knight, Bassjackers, Dimitri Vegas & Like Mike, Shogun, Cosmic Gate, and many more have accompanied Ferry on multiple venues and FULL ON stages in festivals worldwide. Since then, Full On has gone from strength to strength, with numerous residencies at the likes of Space Ibiza, a sold out ADE show at Panama, and a slot at Dance Valley in his native Netherlands. However, the show hit unprecedented heights when it was given its own stage at Tomorrowland’s 10th anniversary festival in 2013, which saw over 360,000 fans attend the festival across two weekends.

In 2012, Corsten launched ‘Ferry’s Fix,’ a monthly DJ mix that is currently aired on more than 37 radio stations worldwide. In 2012, Corsten released his app for iPad and Android devices commemorating more than 20 years as a world-class DJ and producer. He also has his official Ferry Corsten app for fans. DJs have eclipsed rockstars as this generation’s entertainment industry icons, and Corsten, ever the graceful maestro, is an enduring example of the consummate professional. On top of this, Ferry’s radio show ‘Corsten’s Countdown’ continues to be a compelling weekly broadcast of the very latest releases and future hits from across the EDM spectrum including trance, house and progressive. Known as the only EDM interactive weekly music chart show, ‘Corsten’s Countdown’ currently broadcasts on radio stations in more than 40 countries via 210 radio stations worldwide. The show can also be heard as a weekly iTunes podcast or on YouTube. In January 2017 Ferry celebrated an historic 500 episodes with an 8-hour live broadcast from his hometown of Rotterdam, as part of a special one-off CC500 event where he was joined by a stellar selection of named spinners that include Giuseppe Ottaviani (Live 2.0), Robert Nickson, Solarstone and Stoneface & Terminal.

It was around this time that Corsten announced his new project, the now legendary New World Punx with fellow trance pioneer Markus Schulz. The collaboration sent trance fans into a frenzy and the duo immediately sold out their debut show at Mansion during Miami Music Week 2013. A second show at the world-famous Madison Square Garden followed this, as did another sold out show at Montreal’s Bal en Blanc, solidifying the project as one of the most celebrated of the decade.

Ferry Corsten’s 2016 saw him find his way into the studio to complete the first collaboration between Ferry and Cosmic Gate. Titled ‘Event Horizon’, this highly anticipated group effort following years of remixing each other’s work, was the perfect fusion of pounding bass line and a simple catchy melody, mastering essential trance elements for a timeless record. Famed interpretive painter Norton Williams, who’s collaborated with events from the 2002 Winter Olympics to Coachella Music Festival provided remarkable live art display time-lapse as the music video for the single, giving a striking visual element to the singles release.

Most recently (2017) fans were treated to a remix bundle of his classic track ‘Live Forever ft. Aruna’, which includes remixes from Gareth Emery and Solid Stone. Both remixers highlighted Corsten’s rich harmonies and Aruna’s ethereal vocals in their respective renditions, an ode to the euphoric feeling that launched ‘Live Forever’ into the limelight when it was released back in 2012.

Now the iconic Rotterdam native strides towards his 5th artist album – Blueprint. Out May 2017, this interstellar storyline-driven epic is something unlike any Ferry Corsten record before it. A conceptual masterpiece the album sees Ferry taking his music into an entirely new world combining his love of storytelling, his passion for science fiction and his lifelong bond with music.

Striving always for excellence, this is an artist who is never satisfied with all that he’s accomplished, instead always pushing for the next exciting idea. For Ferry Corsten, the possibilities are boundless.